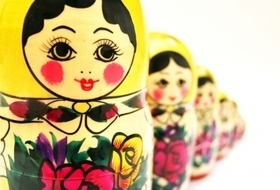 "The Russian language is the official language of the country of Russia. There are many reasons to learn Russian language. Russian is spoken as the first language by over 160 million people. Russian is also widely spoken in the former Warsaw Pact countries of Eastern and Central Europe, where many people learn Russian as a second language in schools. In addition, Russian is one of the official languages of the United Nations (along with English, Spanish, French, Chinese and Arabic)." --Website

This guide will help you get started finding information in these areas, including books, articles, web sites, and media materials.

Go to the Research step-by-step guide.